A group of door-to-door salesmen takes the train to a mysterious suburb. One of them suddenly finds himself in what seems to be an infinite loop, as he continuously returns to the same train station over and over again. 8:30 is a satirical gag about urban alienation, capitalism, and Google Street View, the weirdness of suburbia, and the blurring lines between reality and fiction in the digital age.

Laura Nasmyth was born in the UK, and studied at the Glasgow School of Art before moving to Vienna in 2009, where she now works. She performs various occupations, working as a Production designer, artist, and filmmaker.

Philip Leitner studied with Harun Farocki at the Academy of Fine Arts, Vienna, and works as a filmmaker, musician and visual artist. 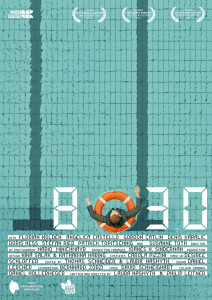