The Mount of Ants in the Bologna Apennines is named after a peculiar phenomenon which has happened for centuries every year on the 8th of September. Every year swarms of winged ants arrive at the Mount of Ants and mate in a wonderful flight followed by the death of all the males, which fall exhausted in the yard of the church on the mountain top, a place of pilgrimage. The film, a powerfully poetic documentary, questions the nature of these tiny insects, a symbol of hard-work, and questions human beings, as well.

Riccardo Palladino (1982) studied at Dams in Bologna. He works as a filmmaker, has written several essays on cinema and has been teaching cinematographic language in various Italian schools. He curated the cinematography for Daniele Segre’s Vestiti di vita (2004). His first medium-length documentary Brasimone (2014) was selected for the competition at Visions du Réel, at the Bellaria Film Festival (Gianni Volpi Award), at Visioni Fuori Raccordo (special mention). 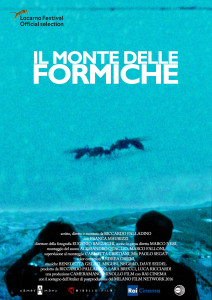