Gurwinder comes from Punjab, he has been working for many years as a field hand in the greenhouses of Agro Pontino, Lazio. Since he arrived in Italy, he has lived with the sikh community in the province of Latina. Hardeep is Indian as well, but she speaks with a Roman accent and works as a cultural mediator. A docu-musical, a mash-up of the language of documentary and Punjubi choreographies which narrates the humiliation of the workers, exploited by foremen and bosses.

Director’s bio-filmography
Andrea Paco Mariani (1983) graduated in Cultures and Human Rights at the  University of Bologna. In 2009 he founded SMK Videofactory, a network of artists and videomaking professionals, which produced the films Tomorrow’s Land (2011), Una Follia Effimera (2012), Green Lies (2014), Vite al Centro (2014), and The Harvest (2017). 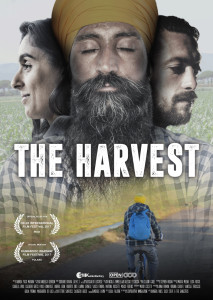