Clara, an aspiring gynaecologist, is enthusiastically supporting her patients, no matter whether they are bringing a child into the world or are making the decision to have an abortion. At the same time, she is attempting to be a good wife and a loving mother to her two young children. However, with the increasing pressure of daily life, her self-imposed systems of belief are beginning to falter, her duties in the clinic suddenly seem insurmountable and her family life seems to be slipping away.

Lilli Schwabe grew up in a small town in Germany. She studied acting in Vienna and New York, where she performed in theatre, film and tv productions. While raising two children, she graduated from the University of Vienna with a Master’s degree in Theatre, Film and Media Studies. Under Pressure is Lilli’s film debut, has been screened at many festivals around the world, and has already received several awards. Currently she is working on her first feature film. 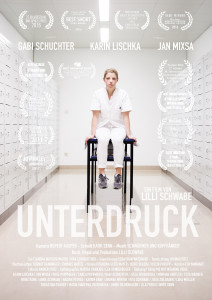