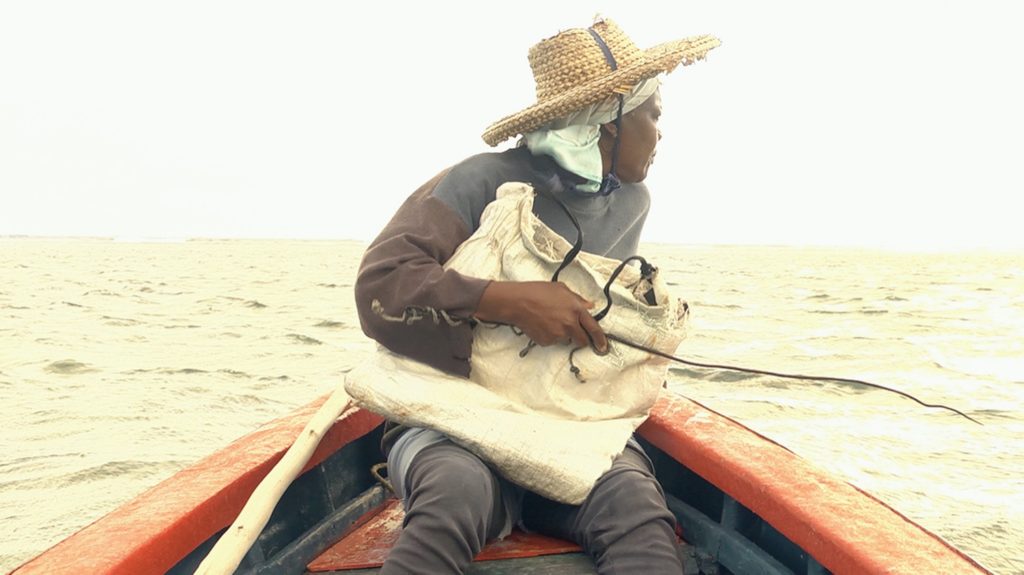 For generations of fisherwomen from Rodrigues Island, in the Indian Ocean, the traditional art of octopus spearing ensured self-sufficiency, emancipation and social prestige. Today, due to climate change and modernization, it is a dying métier, a job that is bound to disappear, an emblem of the unstable drifting of our times. Sec Rouge is an evocative filmic immersion into that fragile reality.

Directors’ bio-filmography
Kate Tessa Lee (1982) was born in Curepipe, Mauritius. After a BFA in Glass at the Rhode Island School of Design, USA, she travelled extensively and dedicated herself to video art and painting. Tom Schön (1969) was born in Speyer, Germany. After years working as a baker, and then as a bar owner, he studied film and fine arts at the Hochschule für Bildende Künste Braunschweig. They both live and work in Berlin.

Marina Resta (WTFF): Sec Rouge is a poetic documentary film about a few fisherwomen from the Rodrigues Island. Theirs is a subsistence job, deeply linked to their life and their relationship with the sea and the surrounding environment. How did you get to know about these fisherwomen? In this community are only women involved in this kind of activity?

Kate Tessa Lee: Since I was a teenager, I travelled numerous times to Rodrigues Island, fascinated by this isolated island where people were living for long in complete autarky and simplicity. A community of islanders then constituted merely of farmers, fishermen, small planters and craftsmen, forgotten by globalisation, uncorrupted by time chronology, living in the present, possessing a primal form of life quality and philosophy. From these backs and forths, I had the opportunity to encounter and befriend octopus fisherwomen from different generations and even develop with some of them a long-lasting friendship. In the early times, octopus-spearing in Rodrigues was an art of fishing practised exclusively locally, and by women. It was an art transmitted from grandmothers to mothers, and mothers to daughters. Then in the late ’90s, the demand for octopus from Mauritius Island increased exponentially and octopus fishing became a lucrative economic activity. Since then, men started fishing octopus. And this has contributed to a massive over-fishing of octopus. Nowadays there are more and more young men working in the sector. However, instead of furthering the traditional art of octopus spearing which is constrained by the natural cycles of tides in the lagoon and the regeneration cycle of the species, these young men are diving and harpooning octopus in deep sea. So traditional octopus-spearing is, in so many facets, a dying métier that is still perpetuated by a handful of practising octopus-fisherwomen of a certain generation.

Marina Resta (WTFF): Climate Change and the modernisation of fishing are making this method for fishing octopuses increasingly difficult and dangerous. This type of fishing has become increasingly marginal. I think it’s no coincidence that in the first frames the protagonist is just as marginal, and even ends up leaving the frame altogether. The whole first scene, moreover, is characterised by a total absence of sound, which creates a suspended atmosphere. Throughout the film, moments of quiet and noise, black and white, light and darkness counterpose. Could you tell us more about these stylistic choices?

Kate Tessa Lee: These moments of visual pun, contradiction, opposition or complementary which you have described, are an integral part of the narrative dramaturgy of Sec Rouge. We see these moments as entry points to emotional memory and to a more subconscious reception of the film. In that sense, we wanted to allude more than explain. We decided to stay on the margin of the explanatory, to open possibilities of interpretations, to induce a filmic, physical and perceptive experience. For that, the film dedicates much time and space to these image and sound associations.

Tom Schön: We have also followed a kind of intuitive way of editing, trying things out, watching the images over and over again, and tried to see how these images spoke to us. Somehow the film edited itself and gave form to these surprising or unsettling image-sound associations. Also, although the sound may seem exaggerated at times, this is all original sound. There were no special sound effects added. Of course, I worked in layers in the sound design and especially in this sequence when the black ocean becomes silvery. But fundamentally, this is the real sound. In this specific scene, the beauty lies in the image while the sound is the beast. It is all about duality in the end. It is a beautiful lagoon, but it is dangerous.

Marina Resta (WTFF): During the film’s only dialogue, which takes place between two fisherwomen, the older one talks about the “language of the sea” and says she can no longer understand it. I was very impressed by this sentence, because it indicates that language is an integral part of any job, not only intellectual, but also and perhaps above all, manual labour. What do you think about this insight?

Tom Schön: You quoted the sentence from Marie Jeanne Azie, “I can’t understand the language of the sea anymore.” This is for me the main sentence in the film. Actually, you do not need more to understand what is going on. These people have hunted octopus since childhood in the lagoon and it was always predictable. There’s a full moon so you have high tide for a couple of days. There’s a new moon, so you have a dry lagoon for a couple of days, and shallow water means you can go to fish octopus.

Marina Resta (WTFF): Did the protagonists of the film have the opportunity to watch it? If they did, what was their view about how you represented them and their job?

Tom Schön: Not yet. But this is a must. It has been the plan since the very beginning. But after finishing this short film, we have just completed a feature film from the same footage material. The feature film is entitled Piqueuses and is not a long version of Sec Rouge. It presents other perspectives and thus differs in form and content. Here, it’s not so much about the element of the ocean. In Sec Rouge, the ocean is omnipresent. In Piqueuses, the ocean is far away. We are stuck on land and dealing with the context of work relocation. Land labor, earth, dried waste land, overgrown plots of land are the new physical, psychological and existential reality of these fishermen. But to come back to your question, we do hope next year, if travel condition enables, to go back to the island and show the film there. Although there are no cinemas on the island, we plan to self-organize a screening tour of the film. That is, to travel to every main village and convert the village community center, for one evening, into a film projection room with the help of a projector, two speakers and a huge canvas. And then invite the islanders and fishermen to see the film and discuss about their experience. This is the plan. This is a necessity.

Marina Resta (WTFF): Are you working on new projects?

Kate Tessa Lee: We are currently working on the research and script-development of a second feature film that will be set in Southern China. The main protagonists are farmers.

Tom Schön: So in other words, we are furthering our filmic investigation from sea to land, to the inland territory.