What would happen if someone had a chance to listen to the sounds of the past? According to psychophonia, sounds don’t get dispersed, but travel eternally through space. Nico is a sound engineer who is looking for the sounds of wars in another time, to be captured with a special recorder. In his search, Nico manages to capture the voice of Andrés, a soldier of the Great War, who is telling about his experience. 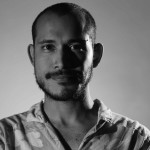 He is currently working on the short-film I Suoni del tempo, an Italian-Cuban-Venezuelan production (Premio Zavattini 2018 for the development of projects with archive films).