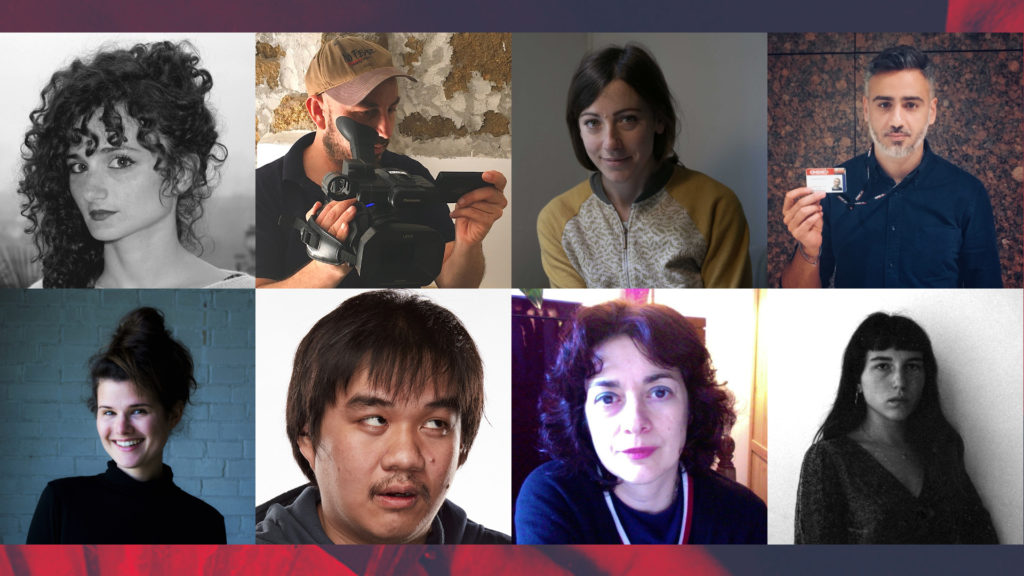 Gaia Formenti (1985) is a screenwriting teacher at Scuola di Cinema Luchino Visconti Milan and at Istituto Cinematografico M. Antonioni in Busto Arsizio. With Marco Piccarreda in 2018 she wrote, produced and directed CittàGiardino, presented at Visions du Réel with the award for Best Innovative Medium-Length Film, and in 2019 she wrote and directed Creatura dove vai?, in competition at FIDMarseille and International Film Festival Rotterdam and selected by Raiplay for FareCinema. She published two short novels and a series of short stories and poems on journals and magazines.

Pierfrancesco Li Donni (1984) got a degree in Contemporary History and studied Editing at Cineteca di Bologna. In 2012 he directed his first documentary film Il Secondo Tempo. Loro di Napoli was presented with awards at the Festival dei Popoli, at Fipa in Biarritz and at DocsMX in Mexico City. In 2016 Prima cosa buongiorno was broadcasted on TV2000. In 2017 he won the Premio Zavattini with Massimino. In 2020 La nostra strada was presented with the award as Best Italian film at Biografilm. He works as tutor for students at Centro Sperimentale di Cinematografia Sede Sicilia.

Francesca Bertin (1985, Castelfranco Veneto, Italy), after studying Law at the University of Trento, attended the Professional Master Class of the Werkleitzt Society in 2014 in Halle (Saale).
She lives in Hamburg where she is finishing her master’s degree in Visual Communication at the Academy of Fine Arts and collaborates at the documentary film festival Dokumentarfilmwoche Hamburg.
She is co-founder of the Gorgofilm collective.

Thanos Psichogios (1982) studied Political Science at the University of Athens and Filmmaking at the London Film School.
His award-winning shorts are adaptations of celebrated Greek literature.
Souvenir, his first in development feature, received the Pack and Pitch award (Sarajevo Talents), funds from the Greek Film Center and the Media Creative Europe, and was selected by the TIFF Pitch Stop, the Cinemed Development Grant, the Zürich Film Festival, the TFL Next – Torino Film Lab, and the MFI script programmes.

Hannah Weissenborn was born in 1993 in Germany. After studying politics, social sciences and law Hannah has been studying feature film directing at Filmakademie Baden-Württemberg since 2015.
She also spent a guest semester at Academy of Media Arts Cologne and at La Fémis Paris.
Her fiction short AM CU CE had the international premiere at Clermont-Ferrand Short Film Festival 2019 and won several prizes, among which Best short film at WTFF4.

Sorayos Prapapan, born in 1986 in Bangkok, started working in the Thai film industry as a Sound recordist and foley artist.
He has directed many short films which were awarded in his home country and were screened in international film festivals including Rotterdam, Locarno, Winterthur and Fribourg.
In 2017 Death of the Sound Man had its world premiere at the Venice Film Festival, in the section Orizzonti, and was awarded as Best short film at WTFF3 in 2018.

(Lleida, Spain, 1966) is an artist based in Amsterdam. She got her Bachelor of Fine Arts Degree at The Rietveld Academy in Amsterdam and her Bachelor of Urban Geography at the Universitat de Barcelona.
She is a painter and she also creates experimental short films that have been screened at several festivals, among which the Forum Expanded at Berlinale, Rotterdam Film Festival, Alternativa Film Festival de Barcelona.
Her film Being and Becoming was awarded the first prize in the Extraworks section of WTFF4.

Perla Sardella (1991) is a documentary filmmaker and editor, born and raised in Jesi, Italy. She holds an MFA in Multimedia Arts and Cinema, from Brera Academy of Fine Arts Milan. Her research deals with moving and still images, and with various formats such as films, photography and video installations. Her works have been showed in film festivals such as Visions Du Réel, Torino Film Festival and Filmmaker Festival, as well as galleries among which The wrong Biennale and Biennale Mulhouse de la jeune création. She lives and works in Milan.