In 1964 sixteen-year-old Italian singer Gigliola Cinquetti won the Sanremo Festival with her song “Non ho l’età” (I’m not old enough) and she became very popular among thousand Italians who had emigrated to Switzerland. They venerated her and sent her letters in which they shared hopes, dreams, solidarity, but also talked about the xenophobia and exploitation they had suffered. Four of these letters talk about Carmela, Father Gregorio, Gabriella and Lorella, who share their own memories in this documentary film.

Director’s bio-filmography
Olmo Cerri (1984) attended the International Conservatory for Audiovisual Sciences in Lugano. He directed several documentary films that have been screened in many European film festivals and broadcast on the Swiss public broadcasting organisation RSI, among which Al film dal Nicolín, Volo in ombra, Una vita sul carrozzone, Plinio Romaneschi: l’uomo volante. He collaborates with RSI as an author and director. 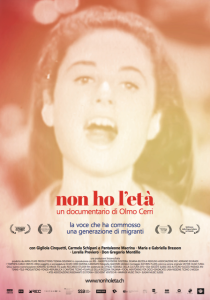