Working Title Film Festival 4 has changed its dates – now from 1 to 5 October – but what remains unchanged is the powerful symbolism of May Day, the International workers’ day, as well as the intention to talk about work through unusual, un-stereotyped perspectives.

One more change from last year, the location has moved to an alternative, much appreciated venue: the screening of the international competition will be hosted by Vicenza’s historic cinema theatre, Cinema Odeon, which has always been very keen on high-quality, “different” cinema.

Speaking of being keen on cinema, but also on the convivial dimension connected with good wine (and not just that), Bottega Faustino will host the opening of the festival with the book presentation La dissolvenza del lavoro by Emanuele Di Nicola, ideally continuing the reflection that started last year about the representation of work in audiovisual works in the last decade.

Zerogloss / Exworks is again a point of reference as it has always been since the very first edition of the festival: in the evocative setting of a former mechanical workshop, today a design store and a creative space, for the second year it will host the screenings of the “Extraworks” section, about experimental cinema, hybrid cinema, video art, and performance art. The same location will host one more novelty of this year’s edition: “Work in progress”, the meeting of producers and directors, featuring projects on the theme of work that are still in progress. It is a first step down the road of building an increasingly articulate offer, which can transform itself from a showcase to a workshop, as already proven last winter during the spin-off project “WTFF @ Ferrovieri”.

This year’s film selection makes me extremely proud for a number of reasons. One of which, not to be taken for granted, is the large presence of female directors in all the sections (about half of the films). It is not just a mere matter of quotas for women, but of the high quality of the proposed films, which have also been created by women. It is encouraging, since roles such as directors (but also cinematographers, sound designers) are usually hijacked by men.

The female directors of the competing films, as well as their male counterparts, offer a range of unusual, personal perspectives on today’s society at local and global level: Iran and the difficult situation of women (Time to change), a polarised Vietnam – between traditional, land-related jobs (Hoa), and the industry of consumer electronics that exploits its female workers (Nimble Fingers), just as the Rumanian lorry drivers of Am Cu Ce – Pride are exploited in Germany. And again, a completely transformed Russia, seen through the gaze of the director, who goes back there after 20 years (Wir träumten vom Frühling). The fall of the socialist bloc has had an impact onto the life and work of the Cuban protagonist of El Des-bloque socialista.

Di acqua, di fuoco e quello che resta, Ronco rumor remoto, and Drømmeland are inhabited by lonely figures, embodying the dialectics of culture/ nature, which this work endeavours to merge. Something similar happens to the protagonist of L’ora d’acqua, a professional scuba diver. Il giardino is instead a shelter from muggy weather and the repetitive work of the construction of the Pedemontana veneta highway. Het geluk van honden / A Dog’s Luck gets to overturn the perspective, adopting the point of view of an animal.

The narration of work in this edition has also a hard-boiled shade: Cold Blow Lane traces post- modern working and human settings in post- Brexit United Kingdom, whereas La epidemia reveals, through a newspaper scoop, the conspiracy that attempts to deal with the issue of pensions in Spain.

In the Extraworks section two main red threads can be singled out: the relationship with memory and the reflection on intellectual and artistic work. Et in terra Pacis unveils the painful past of a place that is undergoing a radical restoration; Memoria del Fuego is enshrined in the memory of the workers of a cigar manufacturing factory in Nicaragua; Yi Xiang Yu Suo / Foreign Quartiers stands for the attempt to extract, out of the images of contemporary China, the blood tie that links this country to the Sri Lankan director. In Being and Becoming the artistic aspirations of young age become concrete in a work that after all has not missed them by much.

The director of Can you see work?, instead, wonders what, in contemporary society, can be considered to be work and claims the importance of otium (idleness). Last, Mitten takes us through the creative process behind the creation of a choreography.

Words, especially if limited by the need for synthesis, will never deliver the intensity and complexity of the experience of vision. See you in the cinema. 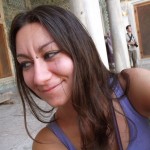 Marina Resta (Altamura, Bari, 1984). She graduated in Film Studies from Università di Bologna and Freie Universität Berlin. She attended the Documentary course at the Film School Civica “Luchino Visconti” in Milan and a Master in Production and Communication at Ca’ Foscari in Venice. As a filmmaker she made Milano fa 90 (2013) and L’acqua calda e l’acqua fredda (2015). In 2018 Tracce di Rocco was selected among the 10 finalist projects of Premio Zavattini. Since 2016 she has been the artistic director and organizer of Working Title Film Festival in Vicenza.